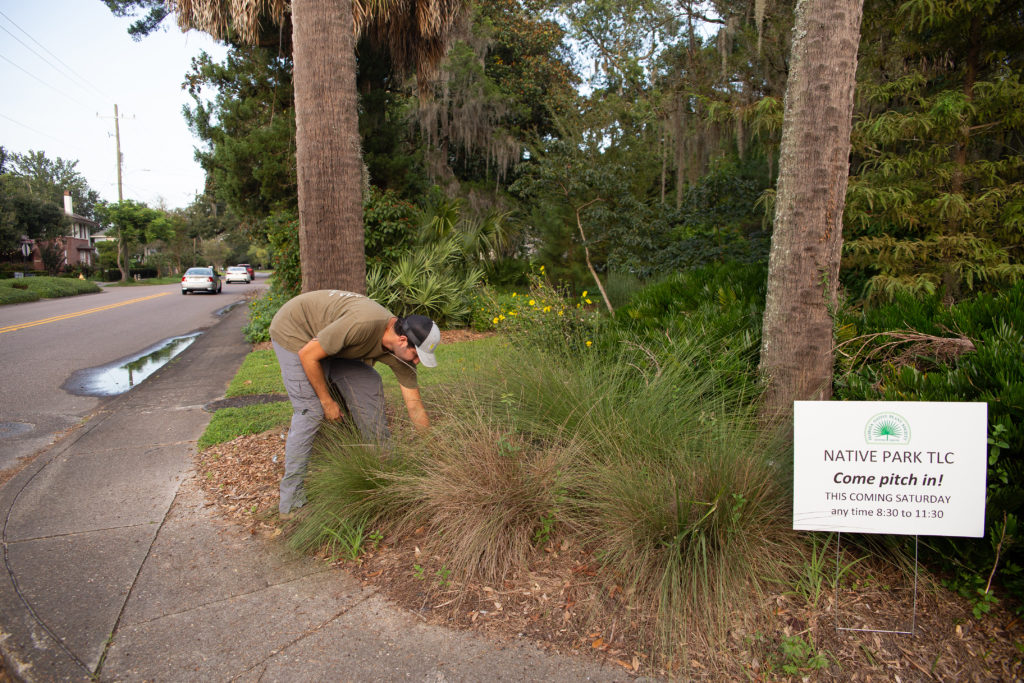 “Tell me, what is it you plan to do with your one wild and precious life?”
– Mary Oliver, award-winning American poet

Well, you might consider a native plant landscaping career. Work outside and save the world. Without more professionals who know how to use and maintain native plants in the landscape, we can’t achieve sustainability in our communities. Expose yourself to the opportunities by joining your local native plant society. Start part-time and maybe even stay part-time. Nick Freeman, a physician’s assistant at his other “day job,” shows how it’s done.

Jacksonville, Florida’s Native Park was established by the Avondale Garden Circle in 1923 to provide a public example of the resiliency that plants indigenous to North Florida have – even when challenged with droughts, freezes, heat, humidity and hurricanes. Unfortunately, over time, a lack of maintenance led to a tangled mess of exotic and aggressive plants throughout the park. So in 2010, the Ixia Chapter of the Florida Native Plant Society (FNPS) adopted the park as part of the city’s Friends of the Park program to restore the grounds for its original purpose.

If you’ve ever driven by Native Park while visiting Jacksonville’s Riverside Avondale Historic District, you may have seen Nick Freeman weeding beds, pruning shrubs or chatting with a park visitor. Freeman, a physician’s assistant in the Jacksonville area, became active with the Ixia Chapter FNPS while studying at the University of Florida. Over the past couple of years, he has volunteered with the chapter at Native Park and other events, where he quickly grew an appreciation for the beneficial qualities of native plants in landscapes. It was then that he began considering how he could play a greater role in educating his community about native Florida. “I asked myself one day at the office; if I died today, would I be satisfied with the work that I’m doing?” Nick paused, recounting that important moment. “Maybe … but I had a feeling that there was something more meaningful. There was a feeling inside me that I couldn’t let go, so I followed it. I knew I wanted to do what I could in protecting Florida.”

That critical reflection transformed into a native plant landscaping service called Wacca Pilatka, which translates to “where the cows cross.” This was the Native American name for the land on which the original city of Jacksonville was established. Starting slow, Freeman picked up a couple projects in the Riverdale neighborhood. Now, just over a year later, he is amazed at how Wacca Pilatka has grown and the opportunities offered to him. One of Nick’s recently completed projects is Native Park #2; an expansion of the original Native Park to a lot across the street – the same park where he began his journey with native plants.

As we walked through the newly planted Native Park #2, I asked Nick how he balances design and installation of native landscapes with his career as a physician’s assistant. He chuckled, smiling down at one of the Bee Balm plants he installed. “It’s pretty crazy … I do shift work in urgent care, so I’m usually working three days in a row, and then the rest of the week I’m working on these landscape projects. Ideally, I want to scale back as a PA and work half and half, and hopefully hire employees for Wacca Pilatka.” Nick likes the balance between both careers, and doesn’t see himself dropping one for the other. And he doesn’t just stop with design and install; education is incredibly important to him. So much so, that you can find him at the Jacksonville farmers’ market, where he sets up simply to have conversations with people about native plants, and explain how these plants can fit into any kind of landscape a homeowner might desire.

Before leaving Native Park to head over to one of his client’s yard’s, we walked one more lap, talking about various plants that call the park home. Nick mentioned how growing up, he’d help his dad with traditional landscape maintenance work that had nothing to do with natives. The most important lessons came from the deep dive he took with the native plant society and his own personal study and practice at Native Park. Today, he still continues to do maintenance there; even pulling weeds and picking up debris here and there while answering my interview questions.

“So essentially, this park right here has been your classroom.” I stated. Freeman paused for a second, looked at me and said, “Yeah … you know, you’re right.” With a smile, I congratulated him. Here he was; standing in the place where he first started working and understanding indigenous Florida plants – and only a couple years later he was expanding the park across the street.

[ This is the second story in a series about native plant professionals written by our inaugural native plant journalist, Isabella Guttuso. By sharing diverse, younger perspectives, we hope to spark conversations about the many ways we can bring more native plants to the urban landscape and just as important, more professionals into the industry to serve the growing demand for landscape sustainability.]